It's so exciting to think about the five newest women of NASA! These graduates are joining the Artemis program, which has a goal to send a woman to the moon, among other objectives, by 2024. It's also meant to help us get to Mars.

The men who actually landed on the moon made some pretty irritating jokes about women in space, but women are who made it possible for them to land there in the first place. Many women were involved not only with the moon landing, but with all of NASA's projects since. Everyone from secretaries to MIT-trained scientist Margaret Hamilton deserve recognition, and don't even get us started on the women of color who were hidden from history for decades.

As much as many people make the argument that men are stronger than women, there are a few ways in which women can truly do men harm biologically. One of those ways is simply the way the vagina weeds out the weakest sperm in a sort of freaky, acidic death trap that helps our species survive. Another is apparently giving men our DNA after we've been pregnant.

We’ve all heard that our generation will be the first to not be better off than the one before it, from jobs to economy to education and general standard of life. But now there’s even more sinister news afoot: women in the United States are not living as long as women a generation ago, either.

In conjunction with Black History Month, I want to spend some time celebrating black women in history. Starting with a recent history-maker, astronaut Dr. Mae Jemison who became the first black woman in space on September 12, 1992 aboard the shuttle Endeavor.

Dr. Jemison was born in Decatur, Alabama in 1954, at the beginning of the Civil Rights movement. (Just a few months before she was born, the Supreme Court ruled that segregation was unconstitutional in their decision in the landmark Brown V. Board of Education.) Jemison's mother was a math teacher, and when Jemison was three her family moved to Chicago's Southside so that she would have access to better schools. (Which should tell you all you need to know about the state of education for black kids in Alabama in the 1950s.) Undoubtedly her family's focus on education was critical to Jemison's success.

Her mother also encouraged Jemison's interest in science from an early age, and throughout the teen years when many other girls start to drift away from science classes. We have discussed this anti-female science bias before, so it's interesting to see a counter-point: a strong parental influence and direct encouragement. Jemison's mother was invested in science, and she was able to bolster her daughter's interest. (And look how that worked out!) 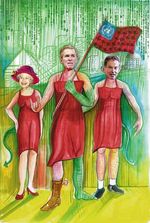 David Icke is a fascinating figure.  He began his career as a sports commentator for the BBC, and a Green Party spokesman.  Then after a fateful encounter with a psychic, Icke had a spiritual awakening.

In an interview that was ostensibly to be about something sports-related, Icke announced to the world that "he was the son of God, and predicted that the world would soon be devastated by tidal waves and earthquakes.  From this rapid turnabout, David Icke became one of the most prolific and disturbing futurists in the movement which he dubbed "New Age conspiracism."

When I was a kid, I had this incredibly morbid book about spontaneous human combustion.  It was written in as lurid a fashion as possible, had a collection of glossy photos in a central inset, and put forth the most preposterous theories with great enthusiasm.  I'm pretty sure I bought it out of the nickel box at someone's garage sale.

(Sometimes I wonder what my parents were thinking, letting an eight year old girl read a book about spontaneous human combustion.  Maybe they didn't notice, or maybe they were just happy that I read books at all.  Certainly I doubt they realized that I was both compelled to read it, and suffering from nightmares where I woke up with half my body burnt and reduced to ash.)

“Are you not entertained?” She roars to the crowd. She is fierce, mighty, unstoppable. She will bring death—and Rome will love her for it.

I won’t profess to be a fan of gladiators, fighting, or violent, death-inducing sports of any kind; I certainly am not. But knowing that the strong, muscular body of a female gladiator has been found is somehow cool to me.

The woman, said to be “massive and muscular,” was discovered buried in Herefordshire, Britain, in a coffin made of wood, iron, and brass. This burial case is considered to be an elaborate one, reserved for someone important or who was honored. Researchers thought immediately that she was a man, since she was so big and strong—until they examined her head and pelvis, which prove that she was likely female.

A safe place for women to discuss news, issues, and politics

We Support
Climate Activism
Click to reach the League of Conservation Voters.
Conversation Processing Intelligence™ beta website!
Click here to visit the hub of the Klat Network.
This site is part of the Klat network of blogs, forums, and communities.